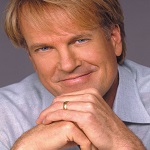 After more than three decades as an international entertainer, John Tesh’s recording, live concert and radio broadcast career continues to thrive.  Tesh’ s Intelligence for Your Life radio show heard in Spokane exclusively on Key 101 is packed with plenty of real-life knowledge, random intelligence, and expert advice on the subjects that are important to you and your family – all surrounded by Spokane’s Greatest Hit Music.

Tesh’s consistent popularity as a TV and radio broadcaster has only amplified the personal connection with his loyal tribe of fans who get to listen to him 6 days a week on the ‘Intelligence For Your Life’ radio and television programs.

Tesh has been married to actress Connie Sellecca since 1992. They have one daughter together named Prima. His wife also has a son named Gib, who now appears on some of Tesh’s radio and TV programs. They currently reside in Los Angeles.

John is very excited to have his show in Spokane on KEY 101! You can listen Monday – Friday from 9 am – 2 pm and Saturday from 10 am – 3 pm. He will give you his take on “Intelligence For Your Life” and play Spokane’s Greatest Hits!